Home/Blog - Recovery after rhinoplasty – what to expect and when

Preparing for surgery is an important part of ensuring a positive outcome. This is a major undertaking for most patients and understandably, there is a degree of uncertainty about what to expect afterwards. Below is an outline of the different phases of recovery.

On the day of surgery

Patients come in on the morning of surgery. The procedure is performed under general anaesthetic (asleep) but patients are awake within half-an hour of the end, sitting up and talking. There is a splint on the nose and a few sutures under the tip. The majority of my patients go home on the day of surgery (daycase) but can stay the night in hospital should they choose to.

Patients are able to eat and drink normally, walk to the shops and look after themselves. Most patients worry about pain after surgery but generally, this is not a bit issue an easily controlled with simple regular painkillers (paracetamol, ibuprofen). Some oozing is common from the nostrils in the first 2-3 days and also at the back of the throat. Patients are seen at 1 week to remove the sutures and ensure everything is healing normally. Some bruising under the eyes and cheek is normal at this stage but resolves within 10-14 days. 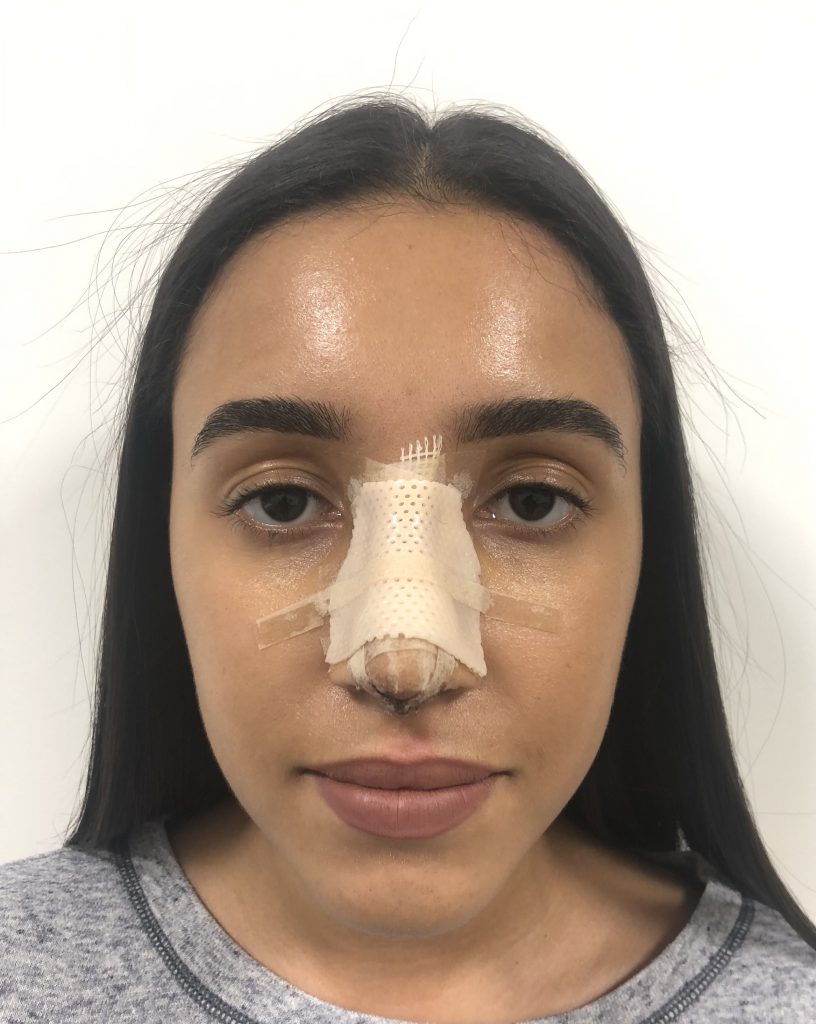 The swelling and bruising dissipates. Although initially congested, patients usually start to be able to breathe through the nose again. Patients are seen in clinic at 2 weeks and the splint is removed. The change is usually immediately apparent although it will be many months before the final result is achieved. It is often an emotional event – seeing the new nose for the first time. Most patients are thrilled but at the same time, the change can initially feel overwhelming. By this stage, the signs of surgery (bruising etc.) are not usually apparent at conversational distance such that patients can function socially (go out for dinner) or return to work without fear of being noticed. 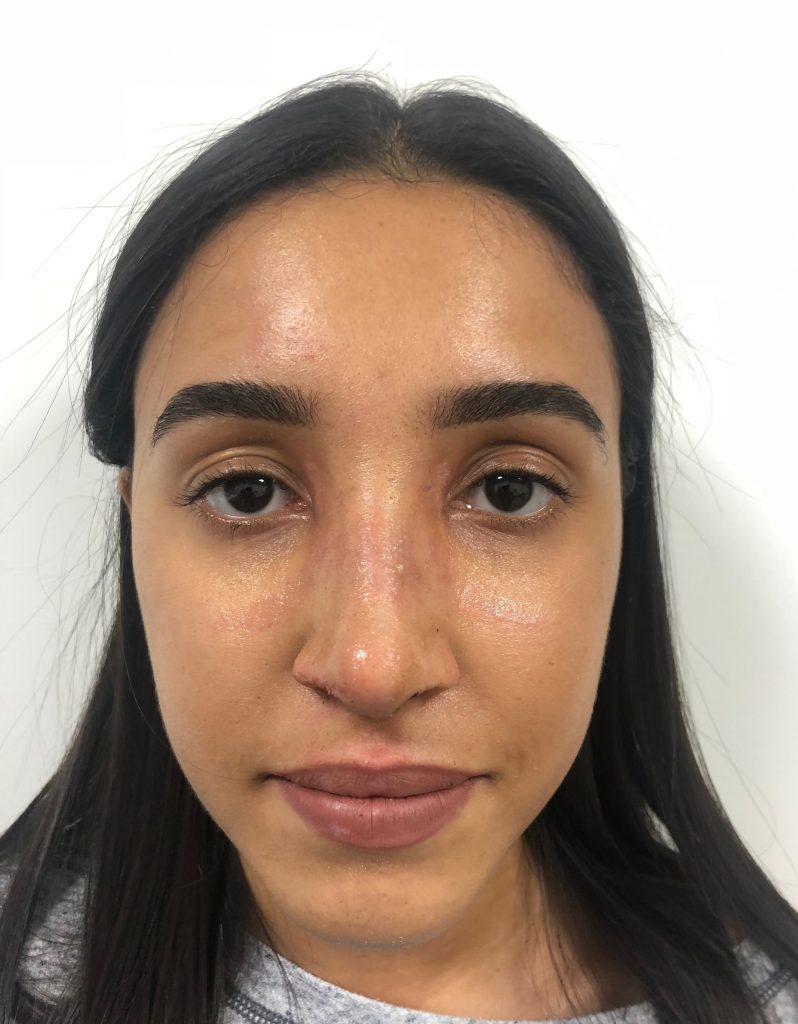 IMMEDIATELY AFTER CAST REMOVAL (IN THIS CASE AT 1 WEEK).

In the first 6 weeks, the changes are noticeable on a day-to-day basis as the swelling goes down. By 6 weeks, 60-70% of the swelling has resolved. Patients can return to normal exercise (running, lifting weights, gym). Breathing through the nose should return to normal (and often improved) but for sufferers of hayfever, the nose is often more sensitive to allergens in the first season after rhinoplasty. 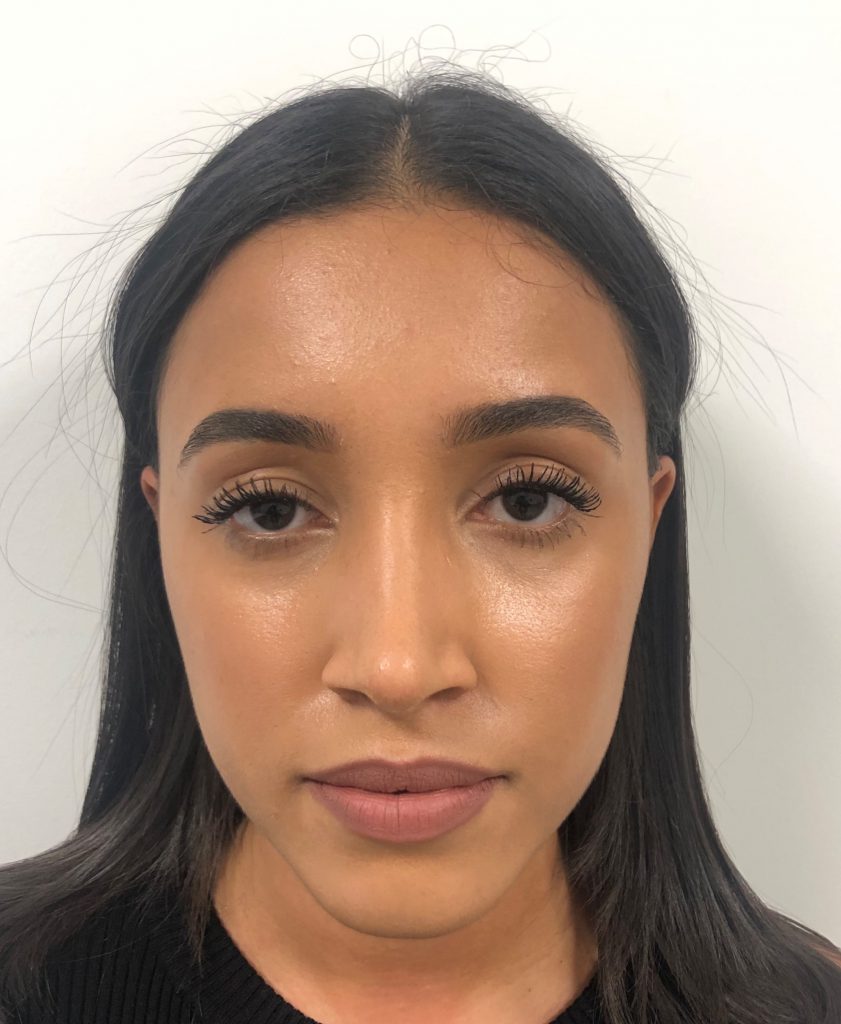 After 6 weeks, changes continue to occur albeit at a much more slow pace – on a week-to-week basis rather than daily. The final result is usually apparent after 1 year although in truth, changes still continue afterwards.